I hope you are taking some time to enjoy the season. I know this year might look different – but we are never really alone right? If you are feeling out of sorts, that is perfectly ok. Its ok not to be ok 😊 We will get through it together, hey, 2021 is right around the corner, right??

So maybe you’re spending more time at home this holiday season, which means you can spend some time in the kitchen working on some really great eats – like this Cinnamon Christmas Star!

Seriously, it’s too easy. If you’ve made cinnamon rolls before, you’ve basically made this sweet cinnamon-y bread. Even if you haven’t, don’t worry that’s what I’m here for.

Talk Dough to Me

This sweet bread recipe is a go to for almost all my proofed breakfast type breads. It is really easy to throw together as well. Here’s what you’ll need:

Super easy right? And since the great yeast rush of 2020, I bet you have some on hand. This bread comes together in about 1.5 hours, but you can take the dough rise overnight in the fridge if you would like. Either way, its as simple as 1.2.3.

Whether you are making this recipe the night before, or the day of, the rise is the most important part of the recipe. Allowing the dough enough time to proof will allow the gluten to develop in the dough. This is what will make it soft and pillow like, but also tear and shareable.

The “star” portion of the dough is the trickiest part – and it’s really not all that difficult. I’ve detailed steps in the recipe below, but as a overview:

I think that this is much easier and faster than rolling up cinnamon rolls. And man does it look nice!

So there you have it, I hope you enjoy the holiday season, and find some time to bake your favorite things! Maybe this Cinnamon Christmas Star will be one of them.

P.S. Head on over to my Instagram and check out my sweet giveaway with CH sugar! 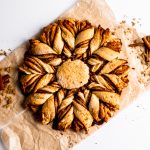 Bake your way to the perfect christmas morning with this easy cinnamon christmas star! Easy to assemble the night before, this will have you on the nice list for sure!

For the Vanilla Glaze:

To make the Rolls:

For the Vanilla Glaze:

The star will keep for 3 days in the refrigerator. To reheat, pop in the microwave for 15 second bursts.