Hello friends! It has been a hot minute since I’ve hopped on here and typed up a post for ya’ll – this year has been a wild one for sure! I’m getting back into it though and will have some new content for you for fall, winter and the holidays! So, lets get started with this amazing pumpkin spice icebox cake!

Now this is for pumpkin spice fans that live in warmer climates (or like cold desserts) and want to change it up from your traditional pumpkin spice cake or roll. It is no less decadent though with layers of whipped cream and pumpkin sandwiching cinnamon sugar graham crackers. Yes please!

One of the most important things regarding this pumpkin icebox cake is that you want to assemble it a least a day before you intend to cut and serve to give it plenty of time in the freezer. This not only will firm up the cake, but it will allow the flavors to really meld and combine. I made this the night before I wanted to serve it and dished it up the next day!

This also means that this cake stores well, up to a month in the freezer. I find that the freezer is the best place for this cake as the fridge just didn’t set it up firm enough. If you want it to be scoop-able, then you can let it firm up in the fridge, you just wont be able to cut it into clean wedges.

So here’s what you’ll need for your pumpkin spice icebox cake:

Let’s Put it together:

First up, the cold heavy cream. There really is no substitute for this as you want stiff peaks of whipped cream to fold into the heavier pumpkin mixture. It is important that your cream is very cold as it will whip up faster. So throw it into your stand mixer, or use a hand mixer, or (goodness) use a whisk and beat the cream until stiff peaks form at the end of the whisk attachment. Don’t over do it though and make butter – so keep your eye on the cream.

Next, whisk everything else (aside from the graham crackers) in a large bowl. Once combined, fold half the whipped cream in using a spatula. You want to go down the middle of the mixture and then around the outside of the bowl. Fold until the cream is just combined, then do it again with the remaining cream.

You don’t have to use a spring form pan to make this cake, but I found that it was easier to remove and store with one. You want to line the bottom of your chosen pan with wax paper then top with a thin layer of your pumpkin cream. Layer up with graham crackers and continue until you are at the top of the pan with the last layer of pumpkin cream. Top with crushed graham crackers, another round of wax paper and then wrap tightly with plastic wrap before popping in the freezer over night.

So why wax paper? Cream (and really any dairy for that matter) is highly susceptible to picking up nasty odors, so unless your freezer is supppper clean, you’ll want to wrap this cake up tight to keep odor out.

Once 8-12 hours has passed, you are ready to de-pan, slice and serve! Now that, my friends, is an easy pumpkin spice dessert that you don’t even turn the oven on for. Enjoy! 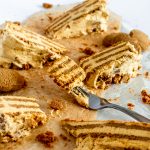 This cake is for pumpkin spice fans that live in warmer climates (or like cold desserts) and want to change it up from your traditional pumpkin spice cake or roll. It is no less decadent though with layers of whipped cream and pumpkin sandwiching cinnamon sugar graham crackers. Yes please!