Hello friends! I hope you are doing well. Staying healthy from 6 feet away and all that. I’ve been seeing a lot of folks attending bread at home lately so I thought I’d pop on and share a super easy recipe for French baguettes at home!

This recipe is from Paul Hollywood, judge one the great British baking show, or is it great British bake off? Something like that. It’s on NETFLIX and its totally binge worthy. Now if you’ve ever seen the show then you know that Paul is the bread king. He always has the hardest baking challenges and some (most) of them revolve around bread.

Have no fear though, you and your French baguettes at home won’t be judged here! The recipe is actually very simple to follow and even easier to eat! 🙂

Before you get to the baking though, I want you to know that I weighed my ingredients in this recipe. I highly recommend that you do as well as bread making is definitely part science/part art. You don’t want to have too much flour or the bread won’t proof properly and conversely too much water that the dough is too sticky. Weighing ingredients makes sure you have the right mix in order to make the perfect baguettes.

go forth and bake bread my friends! i hope you enjoy these easy French baguettes at home.
xo, Danielle 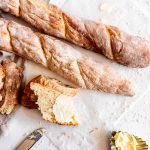 Test your bread making skills with Paul Hollywood’s French baguette recipe! So simple, anyone can do it right??