Hello friends! It’s been a while hasn’t it?? even though it’s the new year, I’m excited to take a quick trip to the past and talk about our amazing trip to Hawaii in November of last year.

It was a quick trip — the reality is that one of my friends was getting married and it made a handy stop over on our way to New Zealand, but that’s another post. So I highly recommend spending more time in hawaii than we do, but if you are only going for a week like us, then maybe this post will help you plan what to do!

In addition to that, if you’re not interested in Hawaii — then click below for a great (and easy) bread pudding recipe. Yassss.

OK, so back to Hawaii. Here’s a brief overview of our trip:

So as you can see, we had quite a bit planned but there was also enough “white space” that we could be flexible with.

So as a bit of background, being an Air Force brat I spend some of my childhood in Hawaii (we lived there in the early 90’s) so part of this trip for me was going to see if things had changed or if I could even remember living there. Thankfully, both happened. I could remember living there but things had definitely changed. Hawaii in general is more crowded and TBH, the beach was not as nice as I remember as a kid. Keep in mind though, we were only on Oahu and didn’t visit the other islands, which I highly recommend if you have more time.

Back to our itinerary! Most flights from the continental states arrive in the afternoon in Hawaii. We flew from Atlanta and it took about 9 hours to get there, non stop. We flew delta and it was a pretty comfortable flight. We we landed going through the airport was a breeze and grabbing out luggage and our uber was no problem. Since it was already the afternoon, we went straight to our hotel to check in and get settled. We stayed at the Hale Koa, which is a USO/Military resort on Waikiki Beach. This was convenient a) because it was cheaper than staying somewhere else B) Centrally located and C) My friends wedding reception was taking place at the hotel. The only draw back to this hotel is that you have to book far in advance in order to secure a room (I think I booked about 7 months out) so if you are eligible for military benefits and are interested in staying at the hale koa then book early! If you’re not, never fear. I found quite a few Air Bnb’s and other hotels that are comparable and wont break the bank.

So after we checked in, we were pretty hungry so we took ourselves downtown Waikiki and went to a famed Udon noodel place called Marakume. Oh my gosh was it worth the wait! It’s basically like a cafeteria style restaurant that served fresh Udon noodle soups and all the tempura that you can stand. Its so worth it.

After dinner, we went to grab some drinks on the beach before we headed back to the hotel to call it a night — travel takes it out of you! And we wanted to be rested for the following day which was going to be packed with exercise!

So moving on to Day 2, we decided that this day was going to be a day of adventures and fun outside. We started the day by renting a car (a mini cooper to be exact) and drove to a town called Kailua, which is on the eastern side of Oahu. This side of Hawaii is know for its gorgeous beaches, water and water activities. We had grabbed coffee at the hotel, so as we set off we didn’t need to stop until we got to the parking lot for the Lanikai Pill Box Hike. This hike is also known as the Kaiwa Ridge Trail and is one of the most picturesque on the island.

An intermediate trail for sure, as it rises pretty rapidly at the beginning and smooths out once you get to the top. And of the views were great! (pictures below) Often people will go up and then come back the same way, but you can hike the entire trail which ends up being about 5.5 miles. If you decide to do that though, make sure you have a plan to either walk the 2 additional miles to your car, or you can do like we did and call an uber. 😛

So after our hike, we were hungry for a *real* breakfast and took that Uber into downtown Kailua to Cinnamon’s which is an island staple for breakfast and lunch. They serve traditional bacon and eggs, but you can also get kimchi and Bulgogi if you’d like. Which of course, I did.

So after Cinnamon’s it was off to more adventures. We booked a double Kayak in advance to try and kayak out to the Mokes, or the Mokolua Islands, which is about a 2 hour round trip kayak. Unfortunately, due to the wave conditions, we couldn’t kayak to the mokes, but we could still go out in the water and check out a few other places so thats what we did.

And let me tell you — as much as I love my husband, I would NEVER double kayak with him again. Ha! I say this because it was a challenge not just in coordination but communication. So maybe it was good for our marriage? Anyway, once we got the hang of it, all was fine but we may have yelled at each other a bit along the way.

Anyway, after kayaking we took our tired selves back to the hotel to change for dinner at Duke’s on Waikiki. We met up with some friends that live there so we had an enjoyable evening eating, drinking and catching up.

On day 3, we started the day with malasadas at Leonard’s. Malasadas are Portuguese donuts that do not have a hole and are covered in a cinnamon sugar mixture. You can also get them filled with a variety of fillings and Kory and I got a chocolate filled, passion fruit filled and cream filled along with three cinnamon sugared. More is more right???

So we took them to the bishop museum where we ate them in a park and then popped inside the museum for a few hours. The Bishop Museum is the Hawaii state museum of natural and cultural history. It’s a great stop for anyone who wants to learn a little bit more about Hawaiian and pacific islander culture. I for one wanted to go because some anthropologist believe that New Zealand was populated by Hawaiian islanders about 1000 years ago, so I thought it would be interesting to see both the origin and the final place of the Maori people.

So after we learned some things at the museum we swung by a welcome party that the bride and groom were hosting to say hi before we went up to the Dole Plantation.

I’m sure I went to the Dole Plantation when I was a kid, but I really don’t remember it. Besides, I really just wanted the Dole Whip that they make there and wasn’t really interested in the other attractions. If you are interested, you can book ahead and avoid the craziness that was the lines inside.

So after our quick pit stop for Whip, we continued north to the North Shore and grabbed some garlic shrimp along the way at Giovanni’s Shrimp Truck. (literally all we did this trip was eat! Ha!) But after that delicious interlude, we when to the bonzai pipeline and watched the big waves roll in.

The winter is when the waves are the largest on the north shore, and often when they have surfing competitions. There wasn’t a competition that day, but there were still plenty of surfers to watch!

After the north shore, we took the long way around the island to get back to the hotel were we changed and went to a super fancy sushi dinner at Nobu Honolulu.

Nobu was certainly one of the most expensive meals we had during our trip but oh, it was so good! We had the taste of honolulu menu which basically meant that the chef choose and plated 7 courses for us to try. We were concerned that that wouldn’t be enough food, but it was perfect. If you’re looking for a fancy night out in honolulu, highly recommend Nobu’s!

On day 3 of our journey in Hawaii, we took a tour of Pearl Harbor. Unfortunately you can only take a boat tour right now, instead of going all the way to the memorial (the dock is damaged) but you can still learn a lot about the history of the place and the attack on pearl harbor on Dec 7th 1941.

It was a sobering tour, and everytime I go, I learn something new.

After the tour, we drove onto Ford Island and took a walking tour of the USS Missouri. The Missouri is anchored in the harbor and is now a museum that highlights the events of pearl harbor as well as the after effects of WWII. The deck of the USS Missouri was also where the surrender of Japan to allied forces took place. Needless to say, it was an experience to see all of that.

After the USS Missouri, we went to get lunch at Nico’s Pier 38, which is literally at the piers and I had the pork Katsu, which was delicious.

After lunch, we returned our little zip around town (aka rental car) and then just hung out at the hotel pool until we went and grabbed some Ramen that was a quick walk away. It was a tiny hole in the wall, which is just how good ramen should be.

So Thursday was Wedding Day! and Kory and I took it easy that morning and went to the beach. After having lunch on the beach we needed to go get ready for the wedding that took place that afternoon. I don’t have a ton of pictures, but it was truly a beautiful experience! Between the ceremony and the reception, we just hung out at the bar at the hotel with some of the other guests.

Then it was time to dance the night away! We didn’t stay out too late, we had an early flight the next morning to Auckland, but we had a great time and it definitely made the trip even more memorable!

So stay tuned, I know I’ve been gone for a hot minute, but I’ll be recapping our trip to NZ as well as a few other things from 2018. Oh, and if you’re just here for the bread pudding recipe…it’s below 😉

See ya next time! 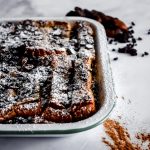 Break out that stale bread and get to baking with this easy bread pudding. Versatile, this pudding is great for breakfast or dessert.