Happy Friday! Kory and I are spending the weekend with friends in Denver but I thought I would pop in and share these delicious Gingerbread Waffles I made last weekend. Cause, you know it’s the holidays and gingerbread is so on trend right now.

So basically this is a traditional waffle recipe with a hit of molasses and loads of spice. Served with a spiced maple syrup would be even better!

If there’s a big, fat lie in waffledom, it’s that good waffles can be made from pancake batter. Sure, pancakes and waffles both contain eggs, flour and leavening, and they’re both served for breakfast. But differences abound.

— Pancakes may be brown on the outside, but they’re floppy, soft and spongy, with an interior that looks a lot like cake.

— Waffles, on the other hand, are crisp on the outside and light on the inside, like beignets, funnel cakes, hush puppies or doughnuts. In short, waffles are fried, only instead of being immersed in hot oil, they are encased in hot-oil-covered metal.

A few points about waffle batter:

— Waffle batter contains a higher percentage of sugar (for caramelization) than pancake.

— Waffle batter includes a bit more fat (for a crisp exterior) than pancake.

So while they may seem very similar, they are definitely different breakfast treats!

As mentioned above, the trick with these gingerbread waffles is that you want to have your waffle maker turned up to the highest setting so you essentially “fry” the outside of the waffle as the inside cooks to a fluffy consistency. Mmm. Yum!

I also find that using spray oil (i.e. Pam) is the easiest way to oil your waffle maker, rather than using butter or the like.

You can top these waffles off with whatever you like, fruit, whipped cream, syrup, honey, you name it throw it on there (fried chicken anyone?!)

I hope these gingerbread waffles inspire you get in the kitchen and bake something delish this weekend! See ya next time! 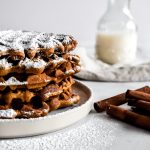 Get your holiday on with these spicy and fluffy waffles