Ok, so I know over the past couple months you’ve seen these ultra fluffy pancakes all around social media — or at least I have — and ever since I’ve been thinking that I needed to take a stab at making them, so that’s what we’re talking about today! Japanese soufflé Pancakes with a pumpkin twist!

Now at first I thought that maybe these pancake recipes were just using some extra leavening power (like baking powder) but then after doing a bit of research, I discovered that a lot of the recipe called for whipped egg whites to provide the lift. *ding-ding* Pancake Soufflés? Yes please.

I mean it makes sense right? The word soufflé in French is a derivative of the word souffler which means “to breathe” or “to puff” which is exactly what these little babies do. Now, the trickiest part about making soufflés — or these puffy pancakes is not necessarily the beating and folding of the egg whites into the batter (though that can be challenging) its the baking/cooking in little rings that can pose a challenge.

Basically you want to grease your baking rings very well and then allow the batter to “set” in the ring before you flip the pancake….while it’s still inside the ring.

Boom! Super easy when you break it down like that right? Honestly, if you don’t have baking rings, you can always make these pancakes with out it. They will still have some height, they just wont be able to “puff” as much during cooking. Still taste delicious though.

So I hope you have fun giving these Japanese soufflé Pancakes a go in your own kitchen! #souffleallday! 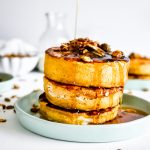