Hello Hello! Oh my gosh ya’ll, we made it to the end of the week. I am so excited for the weekend, although we have quite a few things to get done around the house this weekend so…eh. But! We will have these cinnamon rolls — Fall edition, studded with boozy apricots and currants and filled with cinnamon sugar, pumpkin seeds, and pistachios — ahh! It’s a Fall explosion in your mouth!

But don’t let me try to convince you….these rolls will do it on their own. Now, the base of these cinnamon rolls is built on my normal cinnamon rolls which you can check out here and another variant (carrot-cake cinnamon rolls anyone?) here! This dough is just an all around great base for any and all morning buns and it only gets better with time.

It’s all about the time

Speaking of time, I highly recommend allowing this dough to develop in the refrigerator overnight. This will allow the gluten and sugars time to develop in the dough which will create a soft pillow like texture in the finished product. I know, I know, not everyone has that time but if you doooooo — then it will help your final product. If you just can’t wait, allow for 4 hours for the dough to rise and your final product will be *close* to an overnight version.

Otherwise, everything in this dough is optional. I soaked the dried apricots and currants in some Bourbon and Grand Mariner before I added them into the dough. Of course you don’t have to use alcohol — hot water will work just as well. The point is to soften the fruit slightly so that it will incorporate into the dough thoroughly.

Likewise with the filling — you don’t like pumpkin seeds? Leave them out! You don’t like Pistachios?? Don’t put them in. The best part of this recipe is that you can really make it your own!

I hope that this inspires you to get in your kitchen this weekend and welcome fall with these delectable cinnamon rolls — fall edition! 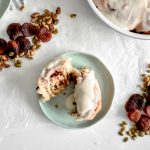 For the Cream-Cheese Glaze:

For the Cream Cheese Glaze: