Hello hello! Thank goodness it’s the weekend! I’m off to California tomorrow for a few weeks, but I thought I would drop in today and give you the *best* cinnamon roll recipe! They taste just like those gigantic Cinnabon cinnamon rolls…only better. 😉 I mean who doesn’t love cinnabon?! But maybe your waistline doesn’t…so while these taste like cinnabon, they are much more waistline friendly. 🙂 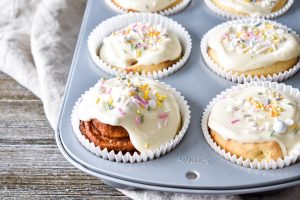 This recipe actually stems from a recipe from my mom for a Christmas stollen, which is a sweet fruit and nut roll that is slightly sweet and usually shaped like a wreath. Now, as with all sweet bread doughs, you could make a gigantic cinnamon roll – circle and that would be pretty cool, or you could bake them in a 9×13 inch baking pan like a normal cinnamon roll recipe, but I made individual cinnamon rolls by baking them in jumbo muffin pans. This gives every cinnamon roll a crunch exterior and a soft center. Plus, they are self contained and easy to get out of the pan to serve. 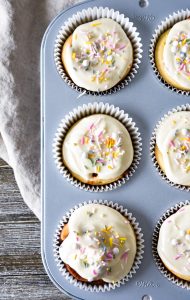 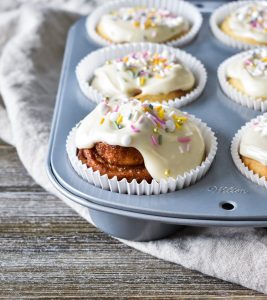 As this recipe makes 24 cinnamon rolls, feel free to mix up the fillings! I added walnuts to half of the cinnamon rolls and kept the other plain, but you could add any nuts you like, additional spices to the cinnamon (nutmeg, allspice, Chinese five spice powder?!) or dried fruits. They’re your cinnamon rolls, so make them how you want them! Just don’t forget to share.

Now go forth and bake! Like the old baking proverb says….prep these tonight and have cinnamon rolls tomorrow. (ok, there’s no such proverb, but it’s true!)

See ya next time! 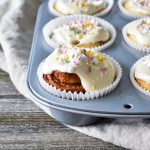 For the Cream-Cheese Frosting:

For the Cream Cheese Frosting: