Hello and happy Monday! The beginning of another week and hopefully yours is off to a great start! I have a very festive recipe for you today in the form of Confetti Macaroons! If you follow me on Instagram and my stories, then you know I had some of these on my way back from Atlanta and I was inspired to make some! 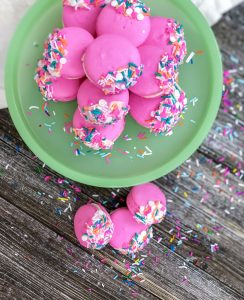 These beauties are a treat for the eyes aren’t they? I just think sprinkles just make everything look better!

On to a bit of history behind these tasty morsels:

Macaroons are a sweet meringue-based confection made with egg white, icing sugar, granulated sugar, almond powder or ground almond, and food coloring. Outside France, a typical macaroon is presented with a ganache, buttercream or jam filling sandwiched between two such cookies, akin to a sandwich cookie.

The name is derived from the Italian word macarone, maccarone or maccherone, the meringue. The confection is characterized by a smooth squared top, a ruffled circumference—referred to as the “foot” (or “pied”)—and a flat base. It is mildly moist and easily melts in the mouth. Macaroons can be found in a wide variety of flavors that range from traditional (raspberry, chocolate) to unusual (foie gras, matcha). (source)

Macaroons have been produced in the Venetian monasteries since the 8th century A.D. During the Renaissance, French queen Catherine de’ Medici’s Italian pastry chefs made them when she brought them with her to France in 1533 upon marrying Henry II of France. Larousse Gastronomique cites the macaroon was created in 1791 in a convent near Cormery. In 1792, macaroons began to gain fame when two Carmelite nuns, seeking asylum in Nancy during the French Revolution, baked and sold the macaroon cookies in order to pay for their housing. These nuns became known as the “Macaroon Sisters”. In these early stages,macaroons were served without special flavors or fillings. (source) 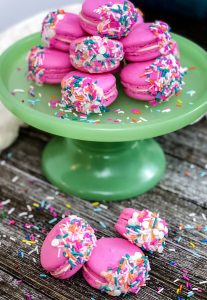 Now, the macaroon’s I made are really a spin off of the original style of macaroon but sine they’ve been around for so long, I’m sure the French or Italian wont mind. It’s interesting that the origins of the cookie rests in Italy when so often we think of macaroons as being from France. You learn something new everyday!

Regardless of where they originated, I’m glad they ended up in America so we can enjoy them too! 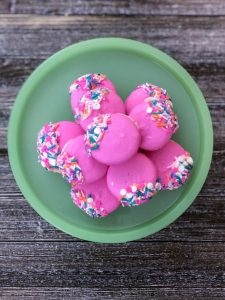 Now, the hardest part about making macaroons, aside from having patience throughout the process, is sifting the almond flour and the powdered sugar together. It’s very important for the texture of the final cookie, for the flour and confectioners sugar to be super fine. This means less bumps and lumps which equals smooth tops for the cookies. 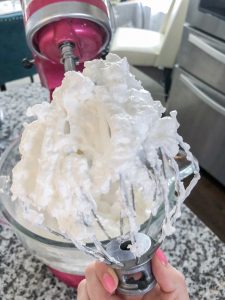 It is also important to tap the baking trays once you have them all piped out as this not only releases the air bubbles trapped in the batter, but it creates that “foot” or pied at the base of the cookie. Even baking is also important to get a puffed macaroon that is light and airy on the inside.

Now I live in Alabama, so making macaroons can be tricky when it gets humid here, ideally macaroons are best produced in a low humidity environment so that they set quickly and cook without becoming gummy. So if you live in a dry climate, its perfect for meringue based desserts! 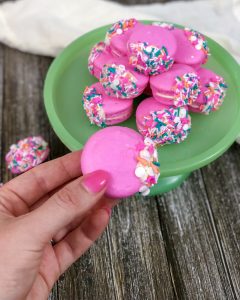 I hope you enjoyed today’s little history lessons in the origins of macaroons and I hope you like this recipe! Don’t be scared to give them a try, they are easier than they look!

Have a great week! 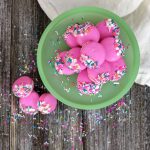